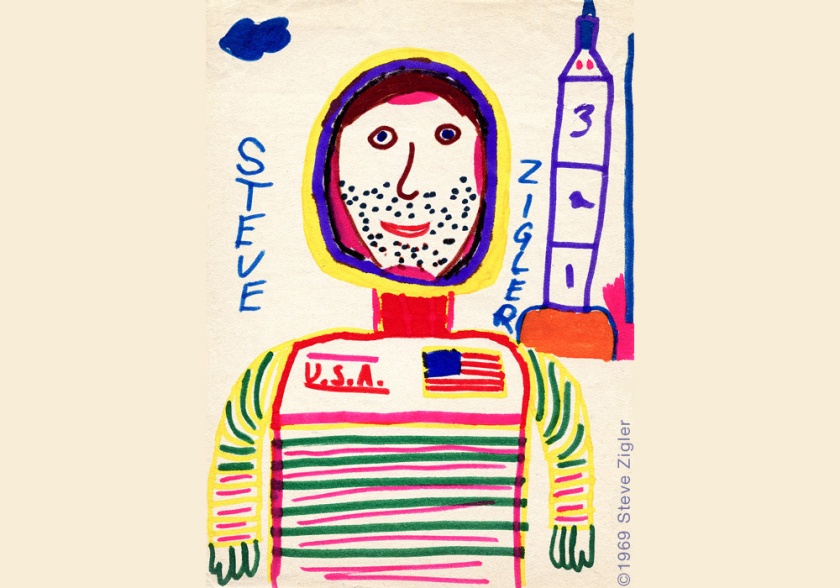 July 21, 2016 Steve Journal, Science Leave a comment
It is hard for me to believe that 47 years ago today astronauts first walked on the moon. Wow! Tempus fugit! I was 11 years old and had just completed the fifth grade. I remember consuming every piece of news and information about Apollo 11. Of course, in those days that meant the local newspaper and fuzzy black and white images from one of three commercial broadcast TV stations. But that didn’t matter. I consumed it all, every single word and every single minute.
I wanted to be an astronaut. I remember writing a theme in fifth grade entitled, “Why I Want to be Astronaut,” including a resplendent drawing in color magic markers of me as an astronaut. Look closely at the accompanying image and you can see that I even included a stubbled beard, which of course would result after a long trip in outer space! In the middle of the theme I noted that I would like to take along my buddy Craig “in case I needed some company.” Ah, the innocence of youth! I earned an “A” on that theme from one of my favorite teachers of all time, Mrs. Murphy. 🙂
Of course, my dreams of outer space eventually succumbed to reality, but I believe those images of Neil Armstrong and Buzz Aldrin left a mark on me that spurred my interest in science and ultimately contributed in a small fashion to a graduate degree in chemistry. I can’t imagine an alternate life path for me. Thanks for your contribution, Neil and Buzz!
I’ve been trying to think of something that is going on today that will inspire eleven year-olds to look back and write about in 2063. That is hard to imagine! The 1960s were a tumultuous time. Think: Vietnam War, assassinations, Civil Rights, the Cold War. Wow, I’m glad I had Neil and Buzz to get me through all that! Hmmm, now that I think about it, I don’t want to say that 2016 is the same as 1969, but 2016 sure seems surprisingly tumultuous to me. Will the next Neil and Buzz please stand up?