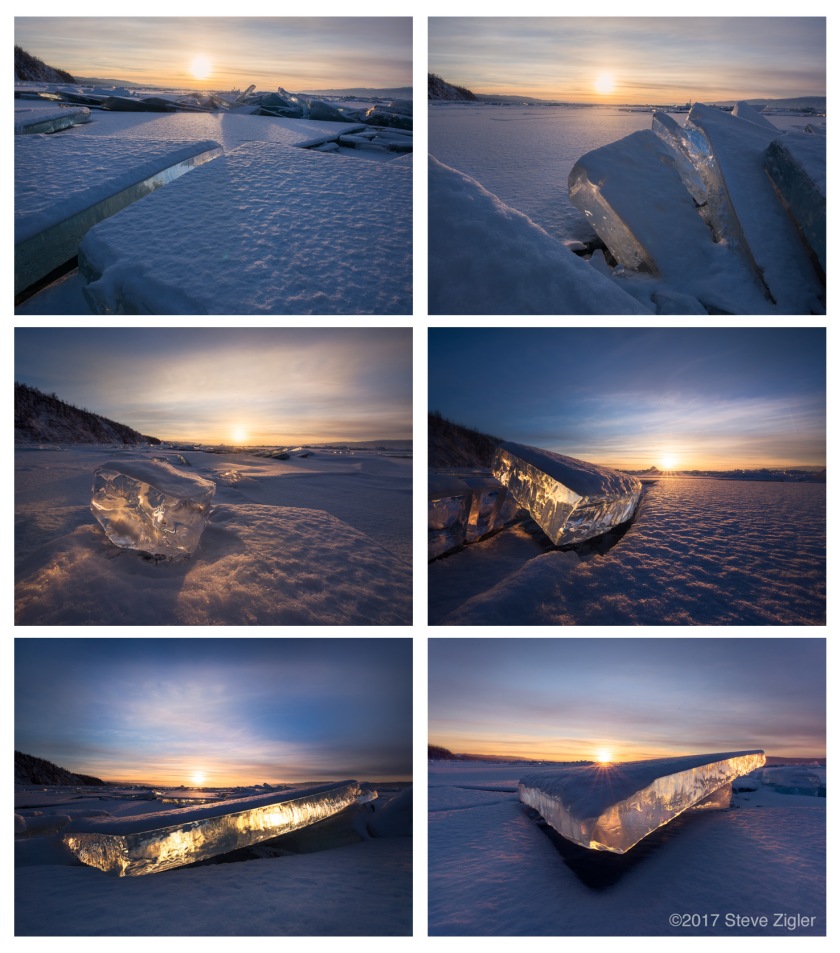 I love all these things about photography…and even more. But without a doubt, the thing I love most about photography is the discovery process that occurs when I first find myself in a new location and I have to figure out how to see it, how to photograph it, and, really, how to bring my own vision to it. If you have never experienced what I’m talking about, the most simple explanation is how to find “visual order” in a world of chaos. It doesn’t always happen for me, but when I can successfully find order in the chaos, it is one of the most rewarding experiences I can imagine.

I experienced one of these moments during my recent trip to Siberia. Late one afternoon, we arrived at a location on the frozen lake where large ice blocks were stacked on top of the frozen surface and on top of each other. Some of the blocks were as wide and long as a car with a thickness of twelve inches. The blocks were crystal clear and coated on the top with a layer of snow from the previous evening. Imagine dozens and dozens and dozens of these blocks of ice strewn across an area larger than several football fields. I thought there had to be images waiting to be discovered within this icefield, but they weren’t immediately obvious to me so I walked in a different direction. After a while, however, I noticed that the setting sun was backlighting the icefield and causing the edges of the ice blocks to glow with yellow light! I immediately changed my strategy and headed back to the icefield with my camera, backpack, and tripod.

As I approached the icefield, I was still struggling with how to find the order in the chaos. It quickly became apparent to me that speed would be the only way I could be successful. This is counterintuitive according to conventional wisdom, which advocates for a slow, methodical approach to discover and capture images. Trust me, I am a disciple of that philosophy, but after exposing one or two images, I knew conventional wisdom would not work in this case. So, I removed my backpack, set aside my tripod, and walked into the icefield with just my camera and the hope that something would come together for me.

Fortunately, after walking a short distance, the images began to reveal themselves. The key was to get low and close. Really low and really close. Soon I was crawling across the snow and ice on all fours while composing with the live view feature of my camera. The combination of the live view and the cold soon consumed my battery, but I had another in my pocket and I quickly replaced it. I didn’t miss a beat. The sun neared the horizon and glowed more and more orange. I continued crawling in the snow as multiple compositions revealed themselves to me. It was magical. Time seemed to stand still, even though the setting sun continuously emphasized the passage of time to me. By the time the sun sank below the horizon, I had captured a dozen compositions and I realized my backpack and tripod were so far away I couldn’t see them. It was time to head back before it was too dark.

To illustrate what I’m talking about, I’ve created a montage of images from the beginning of the shoot to the end. The earliest image appears on the upper left and the last image is on the lower right. The time between the first and last images is about 30 minutes. To my eye, the images greatly improved as I explored the icefield. The more I crawled, the better the images became. These aren’t the only images I created during this shoot, but they illustrate my experience. I hope you enjoy them! Most importantly, they illustrate why I love photography!!