Looking back on the eclipse as a photographer, it is easy to appreciate the beauty in the various aspects of the event. Whether it was Baily’s Beads, the corona, the diamond ring, the chromosphere, the sequences, etc., they are all stunning in ways that I could not have imaged. Really, I still can’t believe some of the images I was able to capture!

Equally amazing, though, is the science that explains these aspects of the eclipse. At the risk of being a complete and total geek (OK, fair enough, you already know that I’m a complete and total geek), I wanted to share a scientific tidbit that I came to appreciate while preparing for and photographing the eclipse. Stop! Don’t leave just because I said science! Please read on…I promise this won’t be a Ph.D. dissertation.

In general, eclipse scientists define four different contact times associated with a total eclipse. The first is when the moon first touches the sun. This is known as “first contact,” or C1, and defines the time the moon first starts to take a bite out of the sun. Practically speaking, this is the beginning of the partial phases of the eclipse. The second time is when the moon completely covers the sun. This is “second contact,” or C2, and defines the beginning of totality. From a practical standpoint, C2 is the time when you start screaming your head off at the sight of the corona and the black hole that used to be our beloved sun. You’ve probably guessed by now that the third and fourth contacts are the reverse of the first two. Third contact (C3) is the end of totality and fourth contact (C4) the end of the partial phases. Based on celestial mechanics, the time of these events is known very accurately. Regardless of where you are in the path of totality, the scientists can predict, to within a half a second, when C1, C2, C3, and C4 all occur. Half a second! How is that possible? Yes, I was skeptical, too. I had a difficult time believing that the calculations could be so accurate. The key is an accurate knowledge of your position. Of course, that is easy with my GPS. So, back on the morning of the eclipse with my GPS coordinates in southeast Wyoming accurate to within 20 feet, I anxiously viewed the sun through my solar filters and binoculars awaiting C1. I was thoroughly impressed when the disk of the moon first touched the sun exactly when the calculations predicted. Later, I was even more amazed when totality occurred exactly on cue, easily within a second of when it was supposed to! That is important because I had two cameras controlled automatically based on the timing calculations, which was a key element in the successful capture of my images. Thank you, science! Because of you, I was able to create some amazing art from the eclipse!

And thanks to you, dear reader, for listening to the science! While the images I have shared speak for themselves, sometimes it helps to know a little of the background in order to fully appreciate the pictures!

On my Facebook page, I have posted a video of a time lapse sequence that I created using a wide angle lens on a Nikon D800. The camera was programmed to take a picture every second for a 10-minute period surrounding totality. The idea was to capture the elliptical shadow of the moon as it raced across the sky at a 1000+ miles/hour. If you watch closely, you’ll see the shadow move in from the right side of the frame, then there will a period of totality followed by the shadow moving out of the frame to the left. The video begins in “real time” mode, then repeats at 50% speed so you can see the movement of the shadow more easily. Check it out!

Here, I’ve included a single still frame during totality from the time lapse sequence. Close inspection of the still image reveals the presence of Venus, Mars, and several bright stars. Awesome! It is quite difficult to see them, so I’ve included a second version of the image where I have denoted the planets and stars with crosshairs. Enjoy! 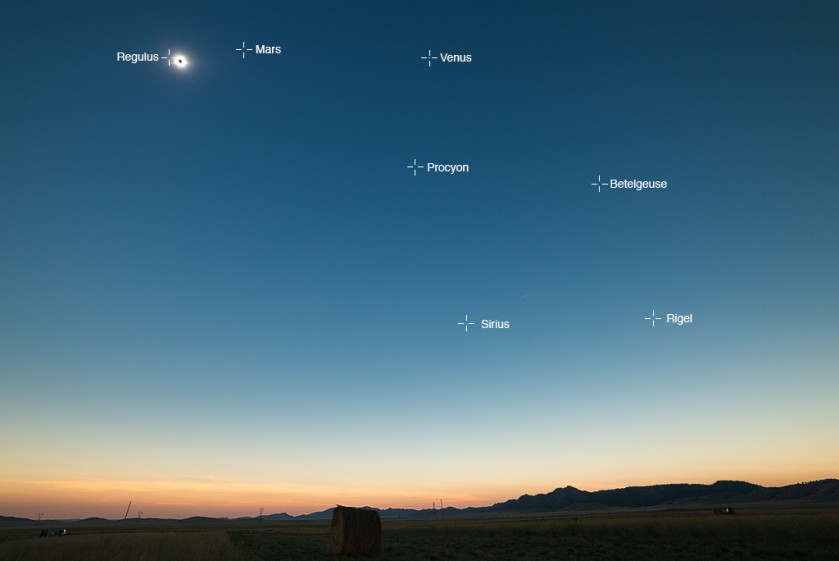