For me, 2018 has started off in much the same way that I spent the majority of 2017: submerged. I’m in the middle of a big work-related project that involves lots of writing and no photography. None. Hence, my absence here. It is all good and I’m really excited to be doing it, but I’m looking forward to finishing it and getting some photography back into life. I hope to share the results of that project with you someday. For now, I have to keep busy on it and get back to work.

But before I do, I want to share a picture and a brief story from the trip I took last summer to Alaska. The trip to Alaska was right before the eclipse, so I didn’t talk much about it, nor did I process any images. That is, until the Christmas holiday when I found this gem buried in the folders containing my RAW files. This picture was taken at the entrance to an ice cave in some place I don’t remember, but it required a helicopter ride, some backcountry camping, and a hike down to this stream. The stream in the foreground had formed a tunnel under a glacier that extends outside the frame of this picture to the right. The picture is a composite of seven vertically-oriented images that I stitched together in Photoshop. The focal length was 16 mm, the shutter speed was one-tenth of a second, and the aperture was f/16.

After I captured the individual images for this picture, I decided to take a break to soak in the scenery with my senses rather than my camera. I sat down on the rocks that you see on the left of the picture. While eating a snack, I looked down into the water near my hiking boots and noticed some shiny grains of sand submerged in the water. Really shiny. In the subdued lighting near the entrance of the ice cave, the specks took on the appearance of stars in the night sky. They really stood out. I reached down to pick up one of them – there were three – and realized that they were tiny flakes of gold! WOW, I thought to myself in all caps. I was fascinated. Here I was – me – sitting in an ice cave at the edge of a glacier in Alaska looking into water that surely had never been seen by human eyes and would never be seen again. And here were these three teeny tiny flakes of gold so small I could barely pick up one onto the end of my finger. WOW, again in all caps.

I managed to get one flake onto the end of my left index finger, the remaining two flakes lost to the stream in the process. I was immediately lost in thought. How was it that these atoms of gold, which were likely formed in some distant collision of neutron stars long before our solar system and the earth coalesced from the atomic ashes of that collision, make it to the end of my finger? Even for such a small speck, there were trillions and trillions of gold atoms on my finger. Did they all form in the same neutron star collision and stay together until I spotted them? Or did they form in separate collisions and then coalesce in the earth’s mantle? If only atoms could talk, the stories they would tell! What forces over time spewed them onto the surface at the base of these mountains and into this stream under this glacier and onto my finger at that moment? I thought how amazing it was that these atoms of gold were billions of years old, older than our planet and everything around me. What an amazing collection of events that led me to that gold in that ice cave. It was humbling. I was surely the first and only human to see this tiny collection of gold atoms.

As my musings came to an end, I briefly pondered the possibility of bringing this speck home with me. No, it was way too small. The attempt would be fruitless. I would have to rely only on my memory to preserve the moment. I put my finger in the water and watched the fleck drift away. I quickly lost sight of it, but that speck, smaller than a grain of sand, moved me like a freight train.

That moment with those three submerged flakes of gold in a remote stream in Alaska will always remind me of the sheer wonder of my planet and my universe and how lucky I am to experience them with my senses, no matter how submerged I might be in the material elements of my work and my life. 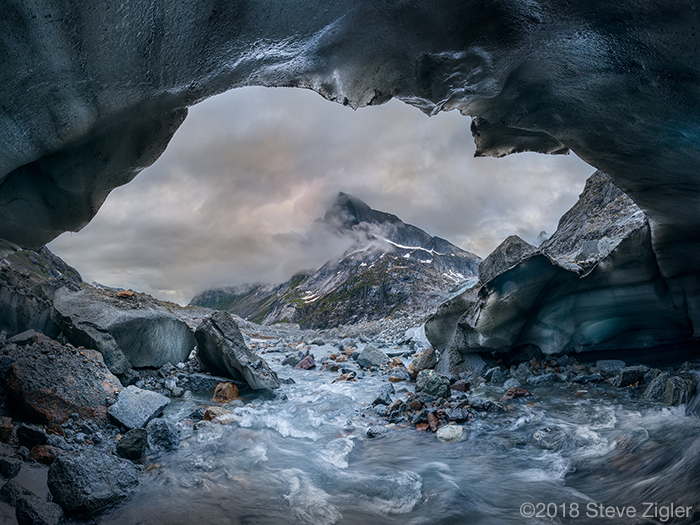