If you look through the posts I’ve written in the past (and why would anyone ever want to do that??), you will see that “tempus fugit” is a common theme in my writing. I guess that makes sense. Writers love to write about how quickly time flies. I’m no different. After collecting more milestones in this life than I can count, tempus fugit is an easy figure of speech to use in my writing.

Well, I have a doozy for you today and I really mean it: tempus fugit. Twenty-five years ago on this day I began a new job here in Knoxville. I moved to East Tennessee to work for a company called CTI. CTI was in the business of positron emission tomography. In fact, CTI was largely responsible for the commercial development of positron emission tomography (or PET for short). I rarely write about my professional life, but I’d like to share some of it here now (Warning! Science ahead!) PET is a powerful diagnostic medical imaging technique that uses small amounts of radioactive tracers to identify cancer and neurological disorders in the human body. If you’re interested in learning more, Google “PET imaging” and you’ll find more stuff than you’ll have time to read, even after you filter out the ads for dog and cat food. Check it out!

I haven’t admitted this to very many people, but within weeks of moving here, I remember thinking to myself “what the hell was I thinking?” The area was new, the job was new, everything was new. And very little of it was what I expected. Little did I know that East Tennessee would become my home and that my career in PET would stretch into a third decade. Back then, cell phones were rare, the internet was an esoteric thing that only computer geeks used, there was no Amazon, there was no Google. Photographs were something made of paper and created with film. People listened to CDs for their music and watched video tapes for their movies. TVs were made of giant glass tubes. Obviously, I could go on, but I’ll stop there. In short, when I started working at CTI 25 years ago, it was like the dark ages by many of today’s standards. Tempus fugit.

Like the world around me, my life has changed in unfathomable ways over the last 25 years. Early in my tenure at CTI, I switched jobs to a subsidiary of CTI called PETNET. Today, CTI is now Siemens, but I still work at PETNET, which is the leading supplier of radioactive drugs for PET in the US, if not the world. On a personal level, more has happened than I could have ever envisioned or even thought possible. I’ve won, I’ve lost. I’ve loved, seen, heard, expanded, contracted, moved forward, moved backward, grown, receded, and just about any other descriptive term you can imagine. Tempus fugit.

My lesson? Life is long. Life is a mystery. Live it. And take a picture occasionally, too! Speaking of which, this image is from a trip to the Himalaya back in 2015. My guides for this trip were Alister Benn and Marc Adamus. I wish I knew the names of these mountains. Marc is the figure in the foreground. Tempus fugit. 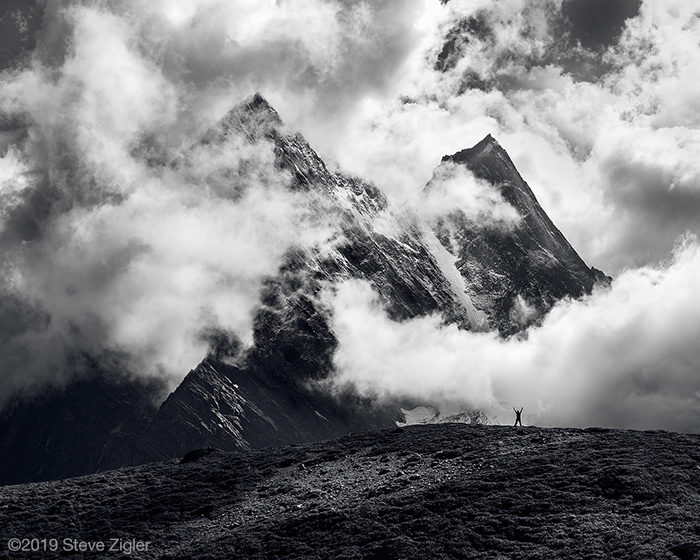