As you may already know, this weekend marks the quadrennial addition of an extra day to our calendar. Yep, it’s time for another Leap Day! This is the moment we correct our calendar to reflect the fact that the Earth’s orbit around the Sun doesn’t consist of 365 equally sized segments. Instead, the Earth requires almost 365.25 days to orbit the Sun. The extra one-quarter of a day is only a six-hour error, which doesn’t seem like a big deal, but it adds up over centuries. Without the occasional correction of a Leap Day, the calendar gets all whacked out and crazy things start to happen. For example, the seasons shift and eventually you’re celebrating winter in July (if you live in Chile, of course that’s nothing to be concerned about). Since some holidays are based on seasons, Leap Days also keep holidays from shifting. In short, Leap Year prevents calendar chaos.

It took a long time for us to understand all this. Over the centuries going back thousands of years, our ability to keep time improved, which led to improved calendar strategies to avoid shifting seasons. Some notable milestones in the synchronization of our calendars with our timekeeping occurred with the adoption of the Julian calendar about 2000 years ago, followed by the Gregorian calendar, which began to be adopted in the 1500s. This is the calendar that most people use today. If you really want to get picky, the super accurate atomic clocks that we use today occasionally force us to correct the calendar by a single second! As the time it takes for the Earth to orbit the Sun of the Earth changes over the coming millennia, those atomic clocks will come in handy, but that is a problem for future generations of humans to deal with. Personally, I’m only concerned with now.

Based on all that, you might think that it is a misconception to view February 29 as “an extra day.” I agree. In reality, the Earth orbits the Sun according to the laws of physics. Leap Day is just a band-aid solution to correct our historically inaccurate attempts to measure the impact of those laws on our home planet. All that said, I’m glad it falls on a weekend so most people can enjoy it without going to work!

Why go into all this? Well, earlier today, I asked a young man what he was planning to do with his extra day on February 29. He looked at me dumbfounded. He didn’t know that February 29 was going to be Leap Day. Fair enough. Many busy people may not realize the extra day on the 2020 calendar. However, as I explained it to him, I realized he had no understanding of the concept of a Leap Day or a Leap Year. I get the fact that not everyone is a planetary scientist or an expert on the Gregorian calendar. I’m not either. But, I think it would be nice for the average person to know just a little about how our planet works. So I’m here to help with that.

Now, here are a few more images from my recent weekend in Death Valley. Not only did I see dunes, but I saw lots of crazy cool clouds and sandstorms, both of which are evident in these images. Enjoy! 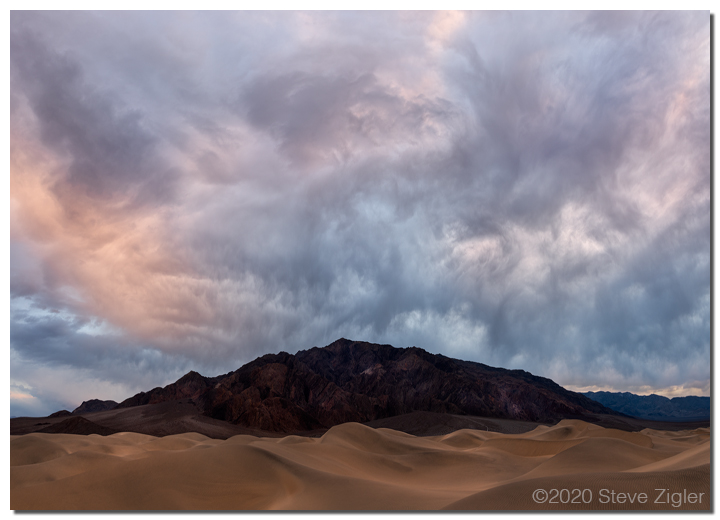