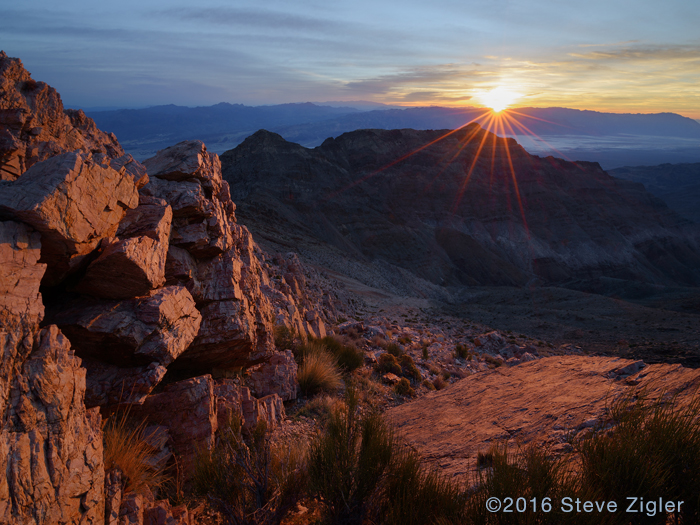 During my last trip to Death Valley, I was visited the Borax museum in the Furnace Creek area. The Borax museum is one of those little-known gems that I often encounter in my travels. I walk by them many times before I stop and then realize how cool it is, and I wonder why it took me so long to visit. If you get the chance, make sure to spend an hour there with exhibits that range from a steam locomotive used on the Death Valley railroad to some fine examples of native American basket making. To me, the places I visit are so much more interesting after I learn some of the historical details of how a place became what it is. This is especially true of Death Valley and the impact of mining on this barren, arid area.

During my visit, there was an interesting fellow named Joe who was demonstrating the lost art of flint knapping. I had never heard of flint knapping, per se, but was more familiar with we call “making arrow heads.” Joe was a master of the lost art of “lithic reduction,” or starting with a rough piece of obsidian and chipping away at it to create tools. Obsidian is a type of rock that looks more like a piece of glass than a stone. Joe could make obsidian tools with edges sharper than a razor blade. Seriously. Joe crafted obsidian by patiently chipping away pieces to create finer and finer edges. He used rocks, antlers, and wood to create highly functional works of art. He told me a story of a colleague who made surgical-grade scalpels from obsidian. You can imagine that creating razor blades and scalpels by chipping away at rocks could be a dangerous hobby. Indeed, flying shards of sharp stone are potentially lethal hazards. To protect himself, Joe wore safety glasses and used a large piece of leather to cover his lap and legs.

Except for the safety glasses, the techniques employed by Joe are the same as those used generations ago all across north America and throughout the world. It is easy to imagine the importance of flint knapping in the days before we learned how to craft blades from metal. Just think of the advantage that a stone arrow head, or knife, or ax would provide in the wilderness in the dawn of prehistory. Of course, we have moved on from stone tools in the modern world and flint knapping is now considered a lost art. I was really happy that I could visit Joe and I felt some comfort in knowing that people like Joe are out there working to preserve lost arts. In fact, I was so fascinated by Joe’s demonstration that I immediately bought a book about flint knapping when I returned home!

My visit with Joe started me thinking about lost arts in general, which reminded me of the discussions I’ve had over the years with my photography buddies about photography. Many of my friends consider photography to be a lost art. Digital sensors have revolutionized the way photographs are created. Mathematical algorithms and software have completely transformed the way digital images are prepared for viewing and printing. The internet and social media have drastically changed the way photographs are distributed and accessed by viewers. In short, the digital revolution in photography has upended the entire world of photography to the point where we now question the very definition of a camera (is it a phone or a computer or camera?) and even the very definition of a photograph (is it a photograph or a file or a screen shot?). Once admired multi-billion dollar companies like Kodak have gone bankrupt because they could not effectively respond to changes wrought by the digital revolution. Kodak invented film and dominated photography for more than 100 years. During that time Kodak responded to many changes in photography from glass plates, to film, to color, to movies, and many more. So, it is surprising that Kodak went bankrupt so quickly as a result of the digital revolution. Ironically, the world’s first digital camera was invented by a young engineer at Kodak in the mid-1970s. Before that time, all photographs back to the invention of the medium were created by chemical processes that involved light sensitive substrates (i.e., film). The images created by the Kodak digital camera were the first photographs created electronically. It is a fascinating lesson in transformation that Kodak invented the very technology that ultimately led to their demise.

One of the most important photographers from a historical perspective is Ansel Adams. He is especially important in the genre that I enjoy so much: landscape photography. I have several friends who personally met Ansel. I would have loved to meet him. Although we have all heard of him, few know why Ansel is so important in the history of photography. He was accomplished in both the craft and the aesthetic disciplines of photography. Through his mastery of both craft and aesthetics, Ansel virtually invented the genre of fine art landscape photography, which helped legitimize photography as an art form in the early decades of he 1900s. He invented new techniques and saw the world with new creative eyes. He also taught and inspired an entire generation of photographers. Unfortunately, Ansel did not live to experience the digital photography revolution and to witness the seismic changes that came with it. However, he was still alive when Kodak invented the first digital camera and he at least had a glimpse of the potential it offered. In his book, “The Negative,” Ansel stated, “I eagerly await new concepts and processes. I believe that the electronic image will be the next major advance. Such systems will have their own inherent and inescapable structural characteristics, and the artist and functional practitioner will again strive to comprehend and control them.” It is not possible to know if Ansel anticipated the extent of the digital revolution, or if he could have foreseen the demise of the likes of Kodak, but he clearly knew that digital photography would leave a mark.

One constant in the wake of the digital revolution, and I think Ansel would agree with this, is that it still takes a person to create a successful photograph. That’s right, photographic composition still matters. The choice of the subject still matters. Craft and aesthetics still matter. These are critical aspects of photography that still require a human being. These aspects of photography belong to the domain of creativity. Computers, software, and algorithms can change the creative tools we use to create, process, and display photographs, but they cannot replace creativity. A human mind, developed through our relationships, our senses, and our experiences define the single most important aspect of photography: creativity. The creative tools may have changed, but creativity has not. This is why I love photography and why I think we will look back on this time as a new golden age of photography.

Photography is not a lost art, far from it. Instead, photography is a dynamic, living art form filled with all the vitality that the human mind that will challenge the creative human spirit for generations to come. And like the generations before us who transitioned from stone tools to forged metal blades, we understand that the most important aspect of the tool is the human being that wields it!